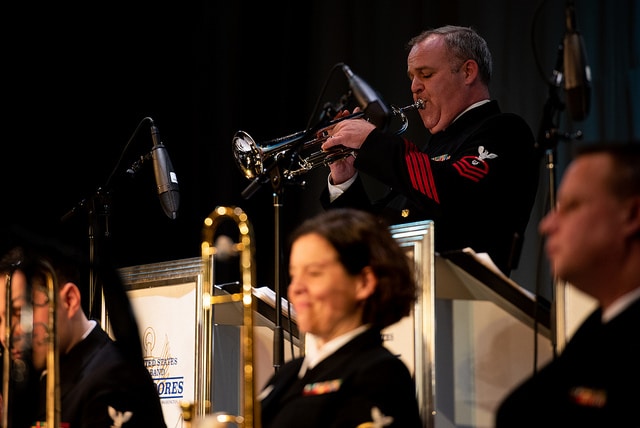 Celebrating 50 years of service, the U.S. Navy Band Commodores jazz ensemble has been performing the very best of big band jazz for the U.S. Navy since 1969. The Commodores write and arrange much of their vast library of music. Their concerts are an eclectic mix of traditional big band music, exciting jazz vocal arrangements as well as fresh new instrumental music written specifically for the Commodores of today. This vibrant, dynamic musical group is constantly striving for musical excellence and the pursuit of new and exciting ways to communicate with their audiences. The list of guest artists that have appeared with the Commodores reads like a who’s who of jazz and popular music: Ray Charles, Branford Marsalis, Clark Terry, Grover Washington, Jr., Chris Potter, Jerry Bergonzi, Eddie Daniels, James Moody and many more.  They have appeared on television shows, played nearly all major jazz festivals and toured across the United States and abroad. In conjunction with the Airmen of Note (Air Force) and the Army Blues (Army), the Commodores even host their own annual jazz festival, the Joint Service Jazz Festival in Washington, D.C.