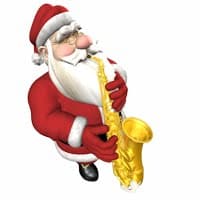 Swing Machine – DC’s Premier Big Band – gets the holiday season off to a jazzy start as only an 18-piece Big Band can!

Swing Machine Big Band gets the holiday season off to a jazzy start with blazing brass, thumping beats and traditional Christmas tunes whipped up into a boogie-woogie frenzy! This is the 18-piece band’s 7th Annual Christmas concert, featuring members of the Glenn Miller Orchestra, the Airmen of Note, Army Blues, Navy Commodores and other accomplished musicians. Members of the band have performed with many well-known artists such as Aretha Franklin, Frank Sinatra Jr., Diana Ross, Mary Chapin Carpenter, Earth Wind and Fire, Stevie Wonder, and many, many more!

Back by popular demand are local students from various schools in a “Combined Chorus”, performing a few songs with the band!

Looking for a unique gift idea? Give family and friends tickets as an early Christmas gift!

Proceeds benefit Capital Jazz Preservation, working to promote music in local schools and throughout the community.