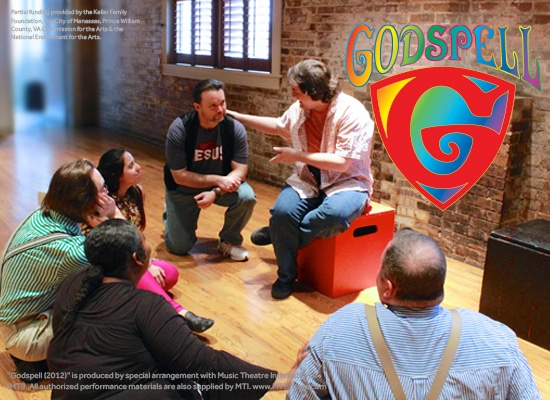 An event every week that begins at 8:00 pm on Friday and Saturday, repeating until April 21, 2019

Join Rooftop Productions this spring as it closes out its season with an eclectic, revamped production of Godspell (2012)! Based on the Gospel of St. Matthew, Godspell (2012) is the story of a comedic group of people who join Jesus as he spreads the message of peace, love and community. Featuring musical favorites and new lyrics such as “Day by Day”, “Learn Your Lessons Well” and “All Good Gifts” by Stephen Schwartz. Godspell (2012) was conceived and originally directed by John-Michael Tebelak, and originally produced on the New York Stage by Edgar Lansbury, Stuart Duncan and Joseph Beruh.

Performances are Fridays and Saturdays April 5-20 at 8pm in the Kellar Theater at the Center for the Arts. Tickets can be purchased online by clicking the link below or by calling 703-330-2787. Tickets will be held at “Will Call” under purchaser’s name. Directed by Ted Ballard. Musically Directed by Daniel Holmes. Choreographed by Maureen Hagerman.