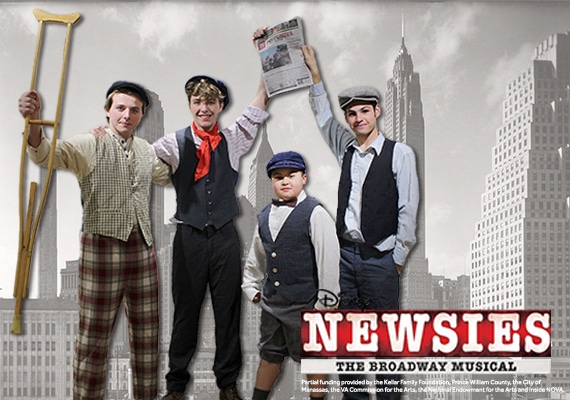 Performances will be at the Hylton Performing Arts Center January 12 at 2 pm and 7 pm and January 13 at 3 pm. Snow dates are February 2 and 3.

This high-steppin’, sensational production of Disney’s Newsies is coming to the Hylton stage! It’s the summer of 1899 and New York City’s newsboys are on strike against the New York Journal and the New York World papers. Protesting price hikes for the newspapers they are selling, the newsies refuse to work and form a union to demand a price reduction. Newsies won Tony awards in 2012 for Best Actor, Best Choreography, and Best Original Score. Outstanding choreography and dynamic songs such as “Santa Fe” and the popular “King of New York” highlight this amazing production with music by Alan Menken, lyrics by Jack Feldman, and book by Harvey Fierstein. Based on the Disney film written by Bob Tzudiker and Noni White, it was originally produced on Broadway by Disney Theatrical Productions. Don’t miss your opportunity to “Seize the Day” by coming to Newsies!