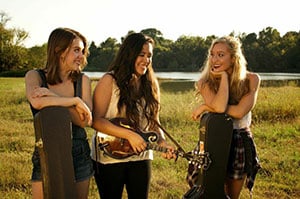 Named by Billboard Magazine as “the next emerging trend in country music,” the Americana-folk Indie trio Maybe April is electrifying the country music scene with its “lustrous harmonies… the appealing mix of their personalities…winningly under-amplified sound…and sophisticated lyrics.” (Chicago Sun-Times) This all-female group met in 2012 and has been taking the country by storm with their singing and playing ever since.