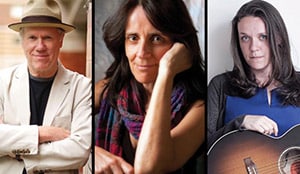 All In A Family

Spend an unforgettable evening of harmonizing vocals, guitar, and humorous stories with Grammy Award-winning American Folk legend Loudon Wainwright, III and acclaimed singer-songwriters Suzzy Roche and Lucy Wainwright Roche in the Hylton Center EXTRA! performance “All In A Family”. The talented trio is on the road together for the first time. Each is an award-winning musical sensation in his/her own right. Loudon’s career spans four decades and is highlighted by more than two dozen album releases, an autobiography, and a plethora of movie and TV credits, including the Netflix Original Film Surviving Twin, produced by Judd Apatow and directed by Christopher Guest.  Suzzy’s lengthy musical journey also began decades ago when she and her sisters formed the popular vocal group The Roches. Today, she records and performs with daughter Lucy Wainwright Roche. The duo has recorded two albums and won the popular vote for best singer/songwriter album of the year for the 2014 Independent Music Awards. Don¹t miss this highly entertaining, musical family perform with warmth and wisdom.