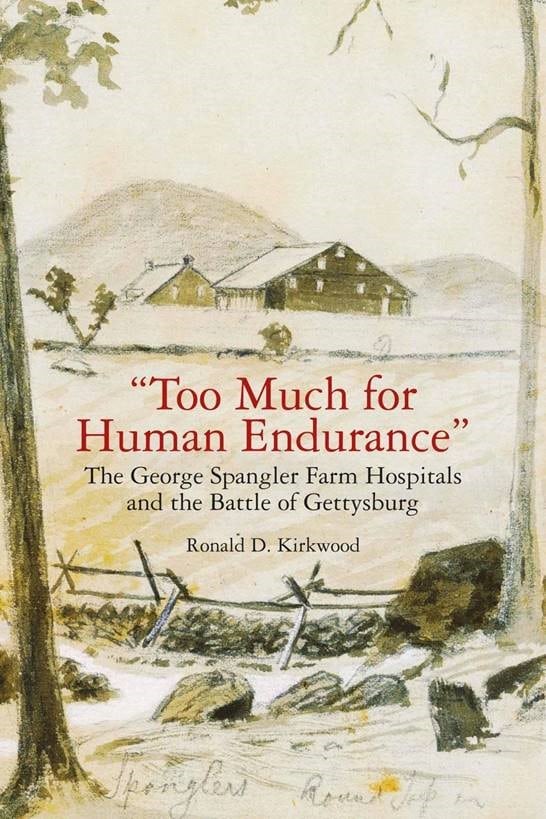 The bloodstains are gone, but the worn floorboards remain. The doctors, nurses, and patients who toiled and suffered and ached for home at the Army of the Potomac’s XI Corps hospital at the George Spangler Farm in Gettysburg have long since departed. Happily, though, their stories remain, and noted journalist and George Spangler Farm expert Ronald D. Kirkwood brings these people and their experiences to life in “Too Much for Human Endurance”: The George Spangler Farm Hospitals and the Battle of Gettysburg.

Using a massive array of firsthand accounts, Kirkwood re-creates the sprawling XI Corps hospital complex and the people who labored and suffered there—especially George and Elizabeth Spangler and their four children, who built a thriving 166-acre farm only to witness it nearly destroyed when war paid them a bloody visit that summer of 1863. Stories rarely if ever told of nurses, surgeons, ambulance workers, musicians, teenage fighters, and others are weaved seamlessly through gripping, smooth-flowing prose.

Ronald D. Kirkwood is retired after a 40-year career as an editor and writer in newspapers and magazines including USA TODAY, the Baltimore Sun, the Harrisburg (PA) Patriot-News, and the York (PA) Daily Record. Ronald edited national magazines for USA TODAY Sports and was NFL editor for USA TODAY Sports Weekly. He has won numerous state, regional, and national awards for his writing and editing and he managed the copy desk in Harrisburg when the newspaper won a Pulitzer Prize in 2012. Ronald is a native of Dowagiac/Sister Lakes, MI, and a graduate of Central Michigan University, where he has returned as guest speaker to journalism classes as part of the school’s Hearst Visiting Professionals series. Ronald has been a Gettysburg Foundation docent at The George Spangler Farm Field Hospital Site since it opened in 2013, and he explores the Gettysburg battlefield dozens of times a year. Ronald and his wife, Barbara, live in York. They have two daughters, two sons-in-law, and three grandchildren.