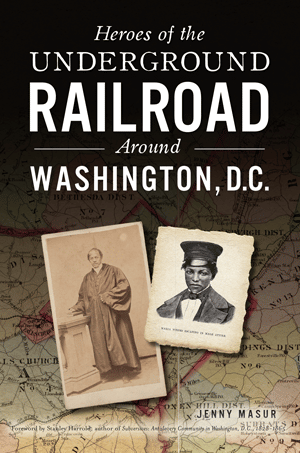 Many of the unsung heroes of the Underground Railroad lived and worked in Washington, D.C. Men and women, black and white, operatives and freedom seekers—all demonstrated courage, resourcefulness and initiative. Leonard Grimes, a free African American, was arrested for transporting enslaved people to freedom. John Dean, a white lawyer, used the District courts to test the legality of the Fugitive Slave Act. Anna Maria Weems dressed as a boy in order to escape to Canada. Enslaved people engineered escapes, individually and in groups, with and without the assistance of an organized network. Some ended up back in slavery or in jail, but some escaped to freedom. Anthropologist and author Jenny Masur tells their stories.

BIO:
Jenny Masur is a native Washingtonian. She worked for seventeen years for the National Park Service as National Capital Region manager for the National Underground Railroad Network to Freedom. Her doctorate is in anthropology, and her interest in individual lives dates from the book Jewish Grandmothers, which she co-edited while in graduate school. Her respect for the heroes of the Underground Railroad continues to grow.