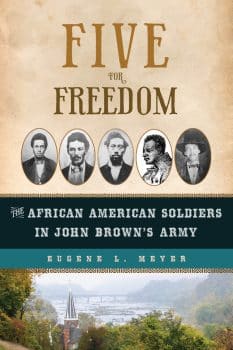 Five for Freedom is the story of five brave men, the circumstances in which they were born and how they came together at this time and place, grew to manhood and died. Their lives and deaths affected future generations, not just of their descendants, but of us all. It is a story that continues to resonate in the present.

Eugene L. Meyer grew up in a house of 25,000 used books in the Long Island suburbs. Since January 2004, after more than three decades at the Washington Post as a reporter and editor, Meyer has been a fulltime freelancer, receiving more than a dozen awards. He has had more than 50 bylines in The New York Times and written for numerous other publications, including Bethesda Magazine, where he is a contributing editor, U.S. News & World Report, Washingtonian, Columbia College Today and Maryland Life. Meyer has been the editor of the quarterly B’nai B’rith Magazine since December 2009. He has written about the rise of citizen journalism and about media codes of ethics for the Center for International Media Assistance, a Washington, D.C. think tank, and about the “gig” economy for CQ Researcher. He is also on the board of the nonprofit online Washington Independent Review of Books, to which he also contributes reviews and essays.

Much of Meyer’s writing is closely tied to his love of history. He also seeks to provide readers with a sense of place about where they live, work or travel. He likes back roads and forgotten places but also finds satisfaction in writing about dynamic changes in cities in suburbs. Over his long career, he has interviewed the Beatles and U.S. Supreme Court Justice Thurgood Marshall, covered antiwar protests from inside and out, spent Jimmy Carter’s last presidential Christmas in Plains, Ga., covered two state legislatures and the release of the Iranian hostages in 1981, gone crabbing and oystering with Maryland watermen, and written newspaper series on subjects ranging from urban renewal and farm preservation to the Chesapeake Bay to a suburban police “death squad.”