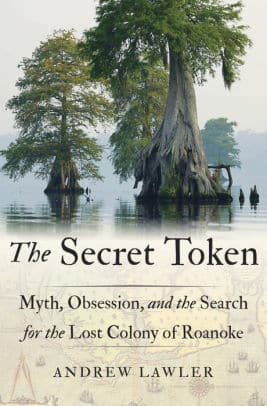 In 1587, 115 men, women, and children arrived at Roanoke Island on the coast of North Carolina to establish the first English colony in the New World–and then vanished. In The Secret Token, journalist Andrew Lawler sets out on a quest to solve an enigma that has obsessed generations of historians, archaeologists, and amateur sleuths. The Washington Post calls it “crazy fun” as well as “surprisingly fresh and powerful,” while the Wall Street Journal deems it “the most authoritative account of the Lost Colony to date.” The Economist says that “Mr. Lawler is an intrepid guide to this treacherous territory,” adding that “his willingness to chase down every lead, no matter how outlandish, and his enthusiasm for the journey as much as the destination, make The Secret Token a lively and engaging read.”

Andrew Lawler is author of two books, The Secret Token: Myth, Obsession, and the Search for the Lost Colony of Roanoke, a Southern Independent Best Seller, and Why Did the Chicken Cross the World: The Epic Saga of the Bird that Powers Civilization. As a journalist, he has written more than a thousand newspaper and magazine articles from more than two dozen countries. His byline has appeared in The New York Times, The Washington Post, National Geographic, Smithsonian, and many others. He is contributing writer for Science and contributing editor for Archaeology. Andrew’s work has appeared several times in The Best of Science and Nature Writing.